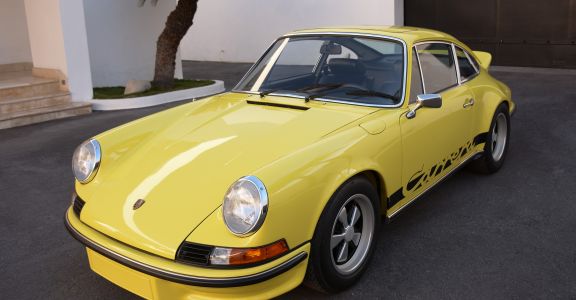 We are excited to offer on behalf of one of our clients this outstanding 1973 Porsche Carrera RS M-472.

For many years, 2shores has been offering selected, finest grade examples of
air-cooled Porsches. This Porsche Carrera 2.7 RS is one of those examples!

The 1973 Carrera RS needs no introduction in the world of car enthusiasts. RS stands for Rennsport in German, meaning racing sport. The RS was developed to meet motorsport homologation requirements and introduced at the Paris Autoshow in October 1972. Compared to a standard 911S, the Carrera 2.7 RS had a larger engine (2,687 cc) developing 210 PS (150 kW; 210 hp) with Bosch mechanical fuel injection, revised and stiffened suspension, a "ducktail" rear spoiler, larger brakes, wider rear wheels and rear fenders, to fit 185/70VR15 & 215/60VR15 Pirelli Cinturato CN36 tires. The initial plan was to just develop 500 examples, but the overwhelming public interest in the car led to a larger production. In total, 1,590 units were made and the cars are considered to be perhaps the most exciting air-cooled road car ever engineered by Porsche.

Correct examples of these cars do not come to the market often and if they do, it is always exciting to see one of these legends.
Our car on offer, RS# 0254, is one of the initial first 500 examples produced, rarely available and highly collectable!

The history of the car can be traced back to the 80’s, when Charles Rupp, owner of Jet Set car in France purchased the car. It was later sold to a Belgium collector and then back to Germany. Max Letowski, a Canadian living in France purchased the car in the 90’s and under his ownership the RS was used for display from the official Porsche Center Paris at Retromobile to celebrate the 30th RS anniversary in 2003. The car also took 1st place that year at Retromobile and was featured over 8 pages in a French Porsche magazine. The RS later (about 2004) sold to known Porsche collector Frank Gallogly in the US. It changed hands within the US a few more times (Symbolic Motor cars, Steve Tillack) until the current owner purchased the vehicle in 2010 from California collector Lorenzo Zambrano.

Under current ownership, the RS underwent a comprehensive nut and bolt restoration with 100% original configuration in mind. The numbers matching engine was completely sorted and rebuilt by well- known and respected Porsche guru Ed Mayo of Mayo’s Performance in Texas and it has less than 2000 miles on it now. The restoration process is fully documented with original invoices and over 1000 photos!

Needless to say, this RS has been owned and taken care of by true enthusiasts throughout its life and only the best in the industry took part in the restoration process. Mechanically, as well as visually, the car is in A1 condition and performs flawless. The RS runs, drives and handles like a dream!

It retains all of its original options and is 100% numbers matching including engine#, transmission#, paint code and “hidden” production number.

Without a doubt, this Carrera RS represents a very rare opportunity to acquire one of the first 500 examples of these legendary cars in a stunning color combination and very nicely optioned.

This car is a truly excellent example for the most discerning collector and enthusiast.

The Carrera RS is now 50 years old and considered a blue chip legend among enthusiasts and collectors!

Please study all the photos closely to evaluate the condition of this car!

Located in Monterey, Mexico. Pre purchase inspections can be arranged!

The above vehicle information has been thoroughly researched and confirmed and is accurate to the best of our knowledge. We assume no liability for errors or omissions.

One of the first 500 series. Blue chip collectable!